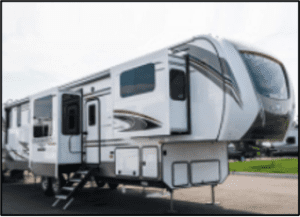 Basically, a travel trailer can be hooked to anything with a hitch on the bumper: a car, a van, the family SUV, a pick-up. As long as your tow vehicle can handle the weight, it can pull a travel trailer. A fifth wheel, though, is a very different animal. The fifth wheel hitch is too high to hook on the bumper of a tow vehicle, being designed to mount in the bed of a pick-up. If you’re considering a fifth-wheel, you’ll need a pick-up with a special towing ball mounted in the middle of your truck bed. You could safely decide whether you want to shop for a travel trailer or a fifth wheel based on this single bit of information. (We told you this would be a quick comparison.)

The big difference: A fifth wheel requires a pick-up. 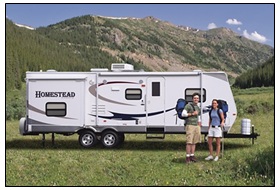 If you don’t have a pick-up truck, and aren’t willing to buy one, a Travel Trailer is for you. However, a fifth wheel does have some notable advantages. For one, with the hitch well forward of the rear bumper, the fifth wheel has an extra five feet or so of living space that sits over the truck bed. With a travel trailer the living space starts several feet behind the rear bumper.

Travel trailers can be trickier to maneuver, too, with the full length of the trailer riding well behind your tow vehicle. Happily, back-up cameras are available in many travel trailers and fifth wheel these days, enabling even the first time RVer to back into a campsite like a seasoned pro. For those campers without this feature, aftermarket back-up cameras are cheap. Expect to pay $100 to $200 for a decent one. Happily, installation is surprisingly simple. Back-up cameras have also improved spousal relations. Many couples who have struggled to park up an RV together feel the back-up camera is the best feature on their RV. (“I said left! Not your left, my left!).

Fifth wheel and travel trailer are usually equipped the same

As far as features and amenities? There’s not much difference between today’s travel trailers or fifth wheels. Many manufacturers even offer the same model in both versions. Keystone RV, for instance, offers a Springdale travel trailer and a Springdale 5th wheel camper.

The front portion of a fifth wheel and or a toy hauler (the part that hangs over the truck bed), traditionally houses the master bedroom. In recent years, though, we’re starting to see front mounted living rooms,

Keep an Open Mind. Just because you started out looking for a Travel Trailer Camper doesn’t mean you can’t consider other options…

The growing popularity of smaller fifth-wheels isn’t all about size, either. Lightweight aluminum frames are replacing heavy wood. Also, today’s composites are both lighter and stronger than traditional materials. Therefore, the modern fifth-wheel weighs much less than older fifth wheels. Shorter lengths have been offset by more slide-outs. In fact, some fifth wheels now feature up to six slide-outs. Six! 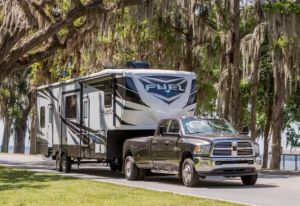 If you’re considering Snow Bird or Full Time travel, a fifth wheel is preferred. Even though there are numerous full-sized Travel Trailers on the market, some research on Fivers is worth your time. However, a full sized fifth wheel may require a new tow vehicle. A new fifth wheel and a new full-sized pick-up will put you in the price range of a new motorhome. In fact, a motorhome may be less expensive. Why? Well, the motorhome combines the RV and tow vehicle in to one unit. Like everything else, you’ll find there are pros and cons with both types of RVs.

You’ll quickly find which option works best for you if you do your homework. Some campers like the fact they can move around inside their motorhome while traveling. Others like the convenience of having a separate vehicle they can unhook from their fifth-wheel when they arrive at their destination. Whichever option works best for you, quality of construction and customer service after the sale must remain paramount to your search.

So how do you find out which fifth wheels will meet your needs? How do you negotiate the best price? 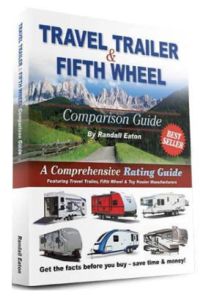 Questions like these and many others are answered in our best-selling guide: Travel Trailer & Fifth Wheel Comparison Guide. With lots of money saving tips, this book has been the gold standard for decades.

In fact, this is the book that started it all. An instant bestseller, it has been the industry’s best-selling RV buying guide for decades. Newly updated, this guide has helped thousands of RV buyers buy the best RV for them at the best price.

More than 40+ RV manufacturers are reviewed with their own article, and numerous charts make it easy to compare one RV against another. If you’re going to buy just one book to help you find the best RV at the best price, this is the one.