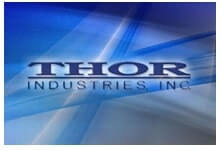 In 2010 the well-known Damon and Four Winds RV manufacturers merged into a consolidation purchase led by Thor Industries and became Thor Motor Coach (TMC). Realizing the merged companies had good products, yet wanting to make them even better, TMC made it a goal to improve on those models. One previous Four Wind brand, the Serrano, was redesigned and completely upgraded. Just a year later, in August of 2011, the Thor Motor Coach Serrano moved into the “Top Ten” of the nation’s best-selling motorhomes.

Originally debuting in late 2008, the Serrano front-engine diesel Class A motorhome was making news with its sleek styling and luxurious amenities. Today those features continue and the Thor Class A Serrano motor coach continues to be popular, with increased overall retail sales. It has a European styling, yet it is an American motor coach, with all the conveniences Americans want when at home or on the road.

The Serrano diesel pusher has all the power you need built on a Workhorse W-20D chassis and powered by a 230-HP MaxxForce 6.4L V-8 engine, with GVWRs starting at 20,500 lbs. The front cap has an aerodynamic design to reduce wind resistance and improve fuel economy.

Each Thor Serrano Class A motorhome has an option of three different interior and three different exterior choices for color décor. Five floorplans in lengths from 32’ 10” to 35’ 2” are available and offer single, double or triple slideouts. Each model has walk around queen beds, full kitchen galleys, and enclosed baths with showers. One model offers a private bath and a half bath placed mid-ship for easy access. All floorplans have sofas, two plans that convert the sofas into hide-a-beds, and U-shaped dinettes, one of which is a free-standing dinette. TMC also added MCD solar and blackout roller shades made with ClearView technology which helps to keep solar light and heat out of the interior during the day while providing dark interiors for sleeping at night.

Thor Motor Coach Class A Serrano diesel pushers are just one of many Class A motorhomes on the market today. Trying to decide which company has the best model, the highest quality, and great customer service and support can be a daunting task. Years of research have been put into our Motorhome Comparison Guide and if you purchase our book those questions will be answered for you. We take away the confusion by providing step by step buying tips, ratings, charts, and reviews on manufacturers, construction and even warranties, all important points to consider when making such an enormous investment.

No Hype – Just Honest RV Reviews You Can Trust!